Guess the World War 1 history hero to win the card and the game! A fantastic educational card game to entertain all ages.

Our WORLD WAR ONE 'heroes' cover every walk of life from the political and military leaders of the time, the soldiers on the battlefields to the Unknown Warrior and the mother who lost 5 sons in that war. 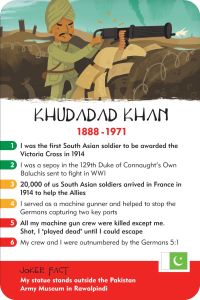 History Heroes: WORLD WAR 1 is just one of our educational card games. This pack contains individual cards of history’s forty greatest World War I Heroes. Each card is fantastically illustrated to represent the specific World War One Hero and shows their dates, their flag of birthplace and seven memorable and often moving facts about them.

Our World War 1 Heroes start with the great unsung heroes: all the animals who served in World War 1 – they all share one card, otherwise there wouldn’t be room for anyone else in the game! World War I History Heroes covers military figures like ‘Black Jack’ Pershing, Marshal Joffre and Field-Marshal Haig. King George and his cousins, Kaiser Wilhelm II and Tsar Nicholas II feature along with political leaders like Lloyd George and Woodrow Wilson.  All of our Heroes shaped and influenced World War 1 from Edith Cavell to Winston Churchill, from Flora Sandes to Siegfried Sasson and from Walter Tull to the Tunnelling Companies. You’ll find these and many more in World War 1 History Heroes

How to Play
There are many ways of playing History Heroes quiz card games. Each pack gives suggestions on how to play, or you can make up your own rules if everyone playing agrees to them!

Win the game by winning the character cards, and you win the cards by guessing/knowing the facts ab out each History Hero. You can use the images as clues and you can use the different levels of facts to make it as easy or as hard as you want to play the game.

Read more about How to Play History Heroes